FVMA Showcase and the VIP Fan 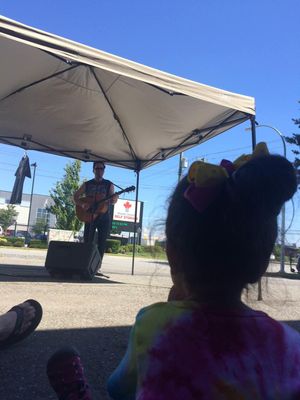 Had the good pleasure of playing an intimate, solo acoustic show out at Old Abbey Ales in a showcase of Fraser Valley Music Award nominees a couple of weekends back. It was a beautiful day at a great little brewery and a bunch of kind folks were out to support. But most importantly for me, was getting to play for my little buddy, Maliyah. My girl came out in a tie-dye shirt, got into the free popcorn, made a couple of friends and danced her ass off.

She and I play guitar and sing and dance around the house all the time, but getting to see her see me performing live was a thrill. She saw me play once before live on CBC Radio when she was about 8-months-old, but obviously that doesn't really count.

When the show started, she began by sitting quietly, but then as the performance went on and she recognized the songs more and more, the dance party began. At one point she came roasting out of the venue with a massively excited smile on her face and she turned and seemed to be headed straight for the parking lot (I was playing outside facing into the venue through a large garage door). I nearly panicked and dropped the guitar, but then my mom (grandma!) grabbed her and everything was fine. Somehow the song that I was playing was still on the rails and seemed to have been progressing nicely. Auto pilot!! Ha!